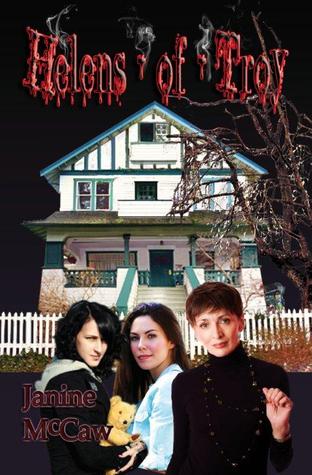 How can I best describe Helens-of-Troy to you? I could say it’s simply like Twilight but without all the crap bits in there but then that doesn’t leave any Twilight left so that would be a poor example. One other review I have seen described it as Gilmore Girls meets Buffy the Vampire Slayer, and I have to say that’s not all that far wrong, although unlike Buffy it doesn’t make you want to scream in frustration through various points of high shrieking, poorly written plot lines.

Like Gilmore Girls, this book focuses upon the often turbulent relationships between three women, a grandmother, the mother, and the teenage daughter. Just like Rory the teenager, Ellie, is a sometimes sullen young girl struggling to break free of the barriers imposed upon her by her mother. And just like Rory she too appears to be older and wiser beyond the 15 years she has lived.

Unlike the Gilmore Girls however, it is the mother, Helen, who is the uptight woman who seems stuck in an age that has long since expired. Opposing her is the Grandmother, Helena, a rather eccentric ‘old’ woman prone to wearing revealing clothing in full view of the neighbours and entertaining a certain Police Officer in her bedroom.

The novel begins with Helen and Ellie moving in with Helena (that’s a mouthful) in a small town called Troy. Things quickly escalate with a dead body being found on the Grandmother’s porch swing instead of the stuffed pieces of cloth being used to scare the trick-or-treaters.

Ellie doesn’t seem at all fazed by the dead body (a little strange but hey she’s probably grown up mowing things down on the Playstation), she is however slightly more scared the next morning after finding out her dream of a kidnapped young girl was actually a vision of the real event. A young girl has been taken from the town and no-one knows where she might be.

Clear panic ensues. But what Ellie isn’t telling people is that she knows who took the child. She knows the culprit is not within the realms of mortal understanding. It is a Vampire.

Now stop groaning right now otherwise I’ll put you in the naughty corner. Yes Vampires have recently been battered to death with the pen and paper of numerous writers (cough cough Meyer and Harris), and of course the money hungry corporate suits who wont be happy until they have bleed the Vampire species for all their non-existent blood. But this Vampire is different.

The Vampire inhabiting the pages of The Helen’s of Troy is very much a Dracula, Barlow esq type character who embraces his Vampire roots and has given in to the evil that inhabits his veins.

This is not some brooding ‘feel sorry for me I’m a vampire’ type ponce that has originated in recent years. This is a pure blooded daemon feasting upon children and seeking his revenge through whatever means necessary. And you know what? He’s damn funny for a dead guy.

But not all is lost. You see the Helens have a secret of their own, it is a secret the grandmother has embraced, that the mother has denied and that the daughter has yet to discover. They are special the Helens. Very special indeed. And they are the only hope against the encroaching darkness.

This book was a pleasure to read. Not only is it a nice chance from the rest of the modern Vampire drivel I’ve read but its witty and almost every chapter has one sexual innuendo or another, I laughed so often when reading this book that I started getting embarrassed with all the other people on the bus staring at me. But you know what? I don’t care. Every now and then you get a book that is so witty you can laugh at the same joke numerous times throughout the day. The jokes, the scenarios, the imagined looks on the characters faces keep screaming back into your mind throughout the day bringing a soft chuckle and a wide smile to your face. This is exactly what The Helens of Troy is. Yes there are a few grammatical and spelling mistakes that were missed during an edit but who bloody cares. I know what it’s supposed to say and 9 times out of ten its something that will rock my world.

The speech is fluid and dynamic, the description vivid and engaging, the characters funny and lovable.

I already miss Ellie’s ups and downs in making friends and falling for the local charmer. I loved old Helena and her inappropriate clothing and the mild mannered way in which she used her bosom to enthral the neighbour. And I even fell in love with Helen, she may be uptight, she may need a slap once in a while but she loves Ellie more than anything in the world and if there is one thing she can do to protect her daughter it is come to terms with the truth of who she is, and embrace it. To stop fighting the truth about what she and her family are and just go with the flow.

I loved this book and you can guarantee I will be reading it again before long. For a few days I can escape the boring monotony of the real world and once more fight alongside the Helens and get a few good laughs into the mix.

Go and grab your own copy of this book. You won’t regret it.

You can find it on Amazon here.

0 comments on “Helens of Troy Review”